/ Khasi and the Black Magic

On and on, ever turning and turning, and sliding up and down the hills of Meghalaya, we pedal to the East. Towards the state of Manipur, burning in the flames of a revolt. Behind us, in front of us, side by side with us Tata trucks roar they way from the coal mines, huge, rubbed, all heavily loaded with coal. “Give way, you little nuisances!” they horn to us huskily. When tired of climbing up the hills, Roma and Gleb speed up and clutch at the frame of the nearest truck. Tata usually doesn’t like this, but the driver sticks out of the window, looking back at them, smiling and absolutely nonchalant about the road safety. 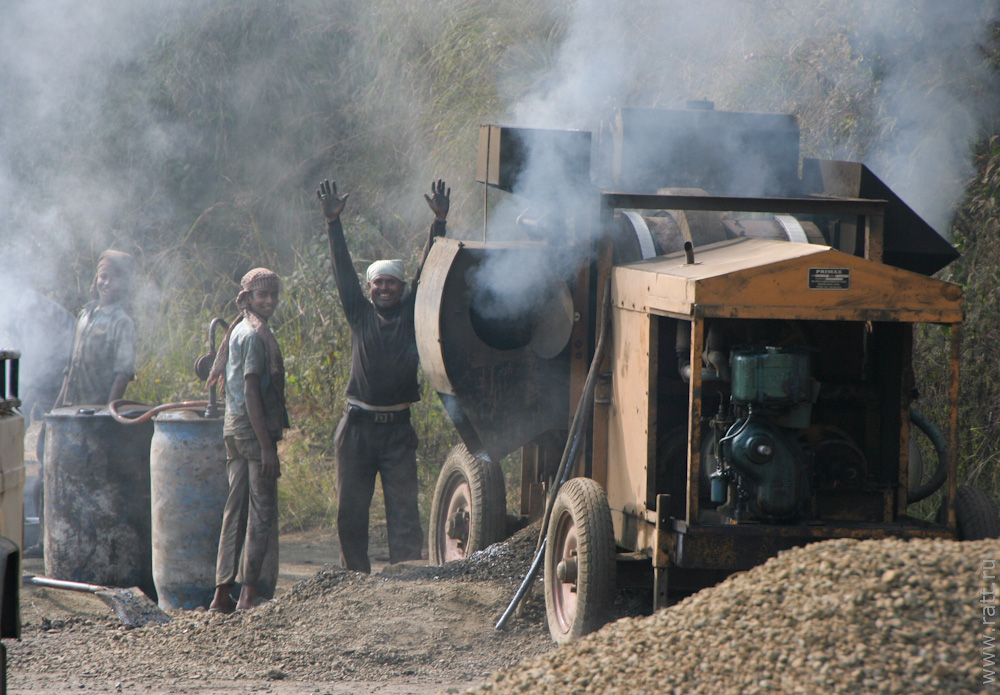 As it gets darker, the traffic remains as dense, but our bikes become almost invisible for the huge trucks. We have to stop somewhere as soon as possible, unless somebody knoks us down. The problem is, there is not a smallest spot along the road, where we could place a tent – there would always be a village, a coal mine or a truck stop. So the five of us – Roma, two Glebs, Natasha and myself – get together by a tea stall in the middle of a big village, we order coffee and try to be as charming as possible to everyone passing by. The crowd around us soon gets thick, and we treat them to coffee also. The girl, making coffee should be glad – she never had so many customers, but… “No, you can’t stay here overnight!” – she slams the shutters of the stall in response to our most charming smiles and a polite question. The crowd is looking at us with all its hundred eyes, drinks the coffee, knods understandingly, but keeps its hospitable proposals to itself. Suddenly, there’s a voice coming from the side of the square, above the crowd of heads: “Hey! Do you remember me??” We do not see a thing in the coming darkness, but Roma shouts in response – “Sure we do!” A man fights his way to us through the crowded square: “It’s Zed! Hi, guys!”.

We hop on the bikes and follow Zed in the absolute darkness to a place which would turn out to be a most charming village house.
A motor vehicle mechanic in his heart, an accomplished master in tuning sport motorbikes, Zed has to work as an odd-hand. Few people in Meghalaya have sportbikes, and almost none of them know what is tuning. We are hosted by Zed’s mother, a tiny lady, tight as a string, with clear eyes and a serene smile. Our morale was already down by that time, and here we got warm hearth, most nice dinner we ever had in India… We were conquered! 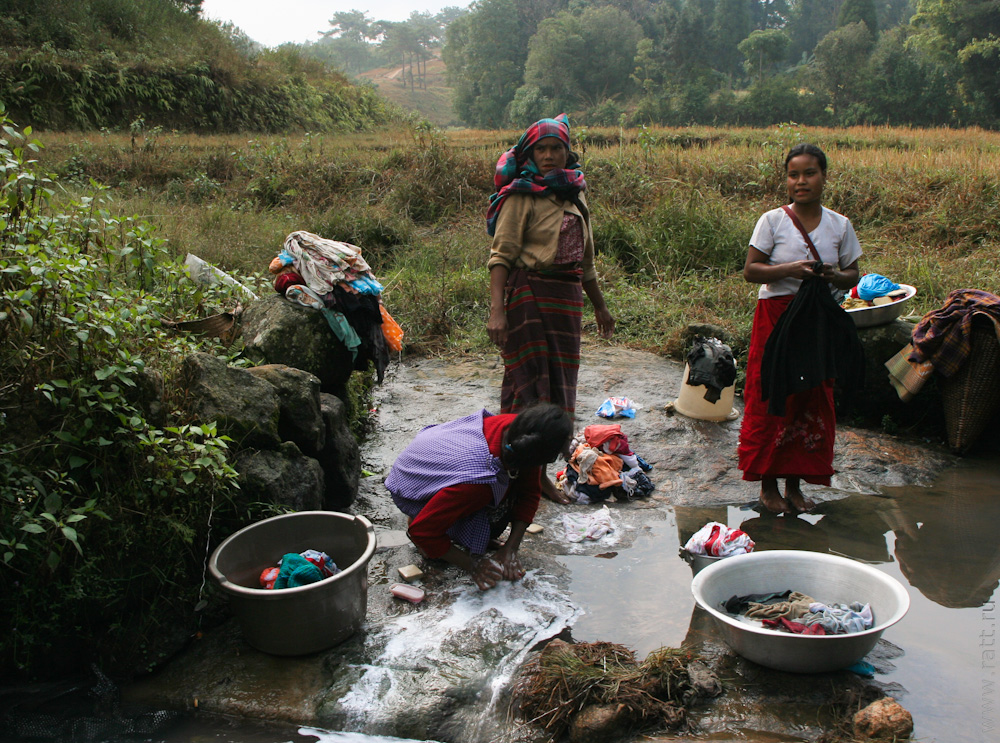 Laundrywomen at the stream near Zed’s village. Traditionally the laundry is done without any detergents, just beating the clothes against the rocks. It helps the laundry to become clean. But it also helps it to wear out very soon.

There we had chance to see and use in real life the exhibits of the khasi houseware, proudly shown in the museum in Shillong, got acquainted to the jovial people of Meghalaya. Hours of stories: how the qwai appeared (qwai is how the Khasi name paan) and how the Khasi alphabet was created (by father Jones, a presbyterian priest), and how the local rice is grown. One of the stories was about Tlu Tuting – a cave nearby. 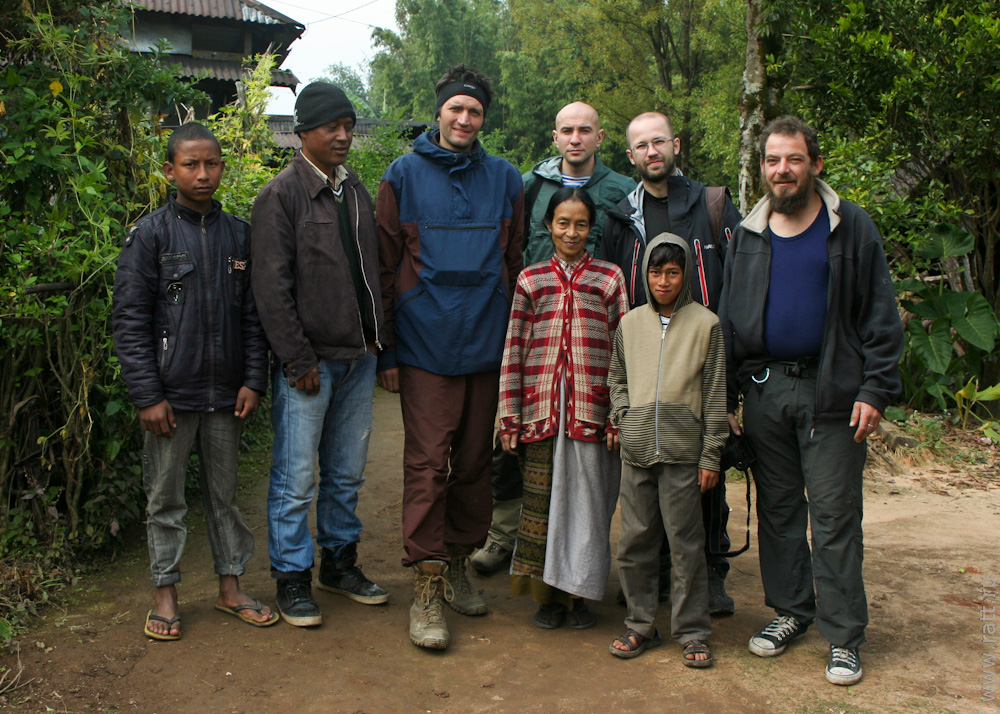 Our team and Zed’s family. Left to right: Whyme with a looks, justifying his name, Zed, myself, two Glebs, Roma. In front of us: Zed’s mother and his younger brother. Natasha is taking the picture.

“It’s a deep and strange cave. Some dogs fell in there and we heard them barkign from deep beneath, and once some people tried to hide a dead body over there. The body was retrieved, but nobody ever riched the bottom”.
By a quirck of fate we have much caving experience. Moreover, we had the gear with us. There was no other way, but to get there. 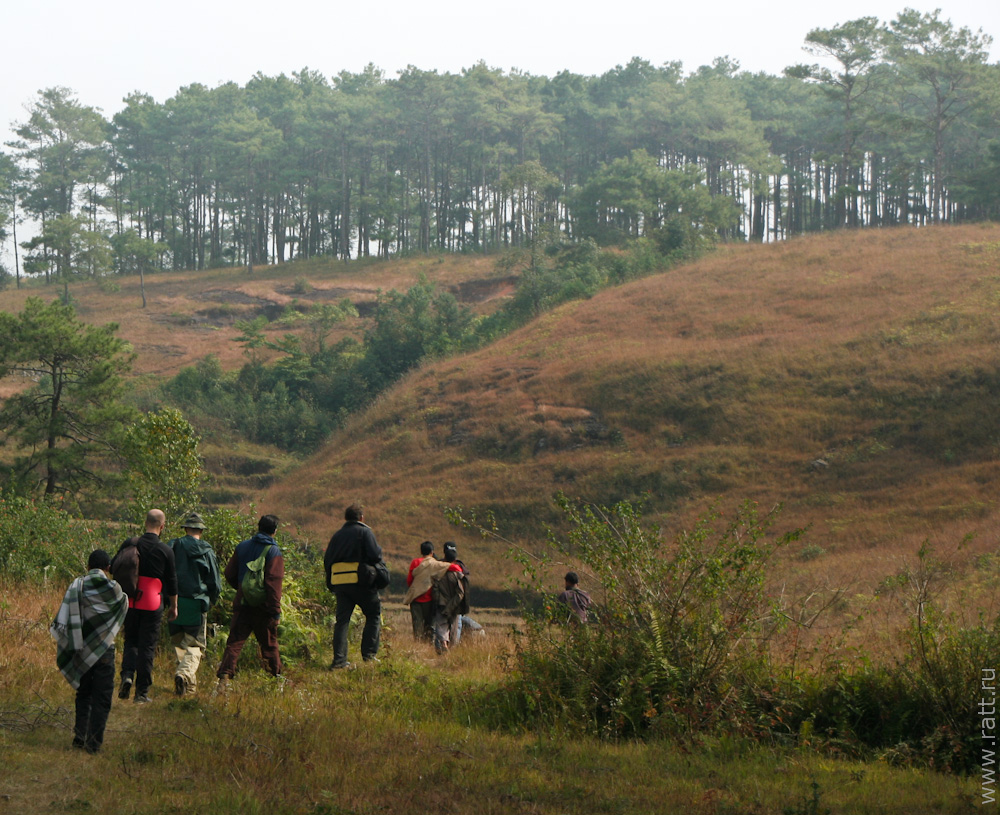 “Expedition” to the cave 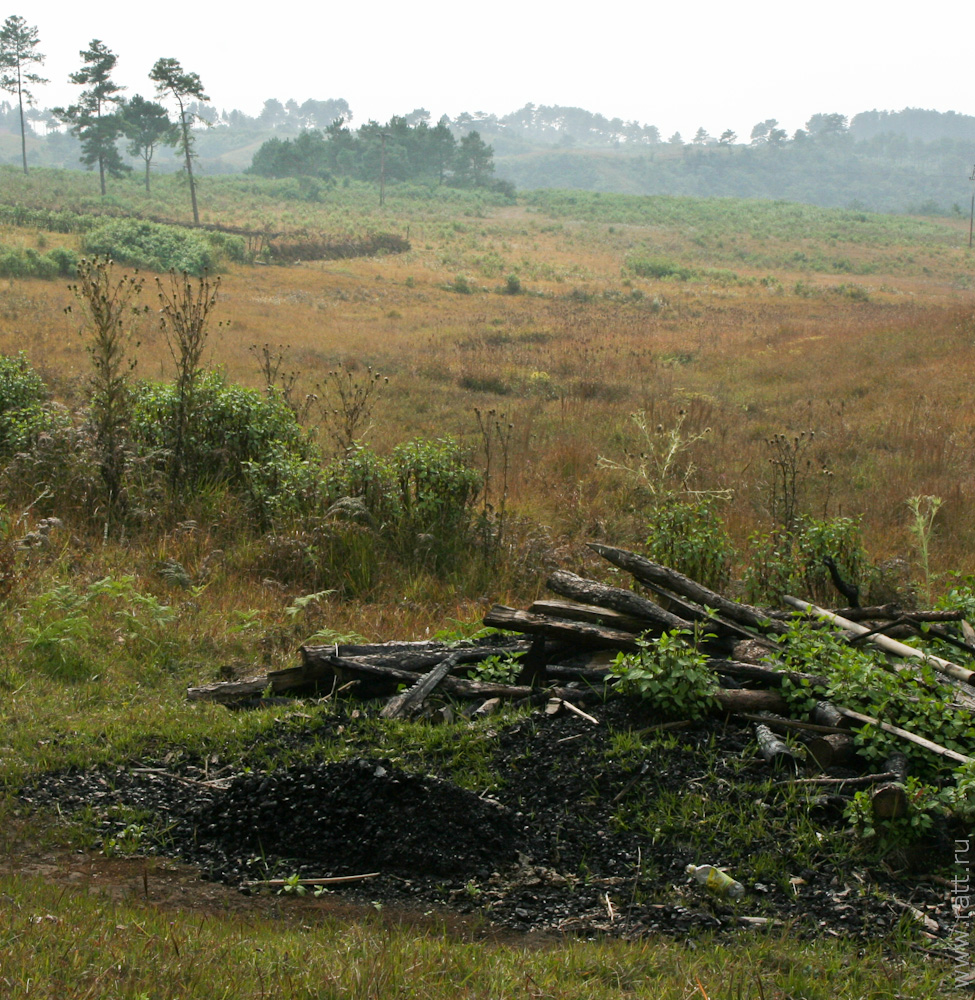 A funeral pile at the backyard

The whole group stopped suddenly, as if they run onto an invisible wall. Zed came up and stared at something on the path. I didn’t see anything special, neither did my friends. But all the Khasis became strangely serious and looked at Zed. He was angry and said: “You see – it’s magic”. He pointed to a small indiscernible symbol in a shape of letter “C”. 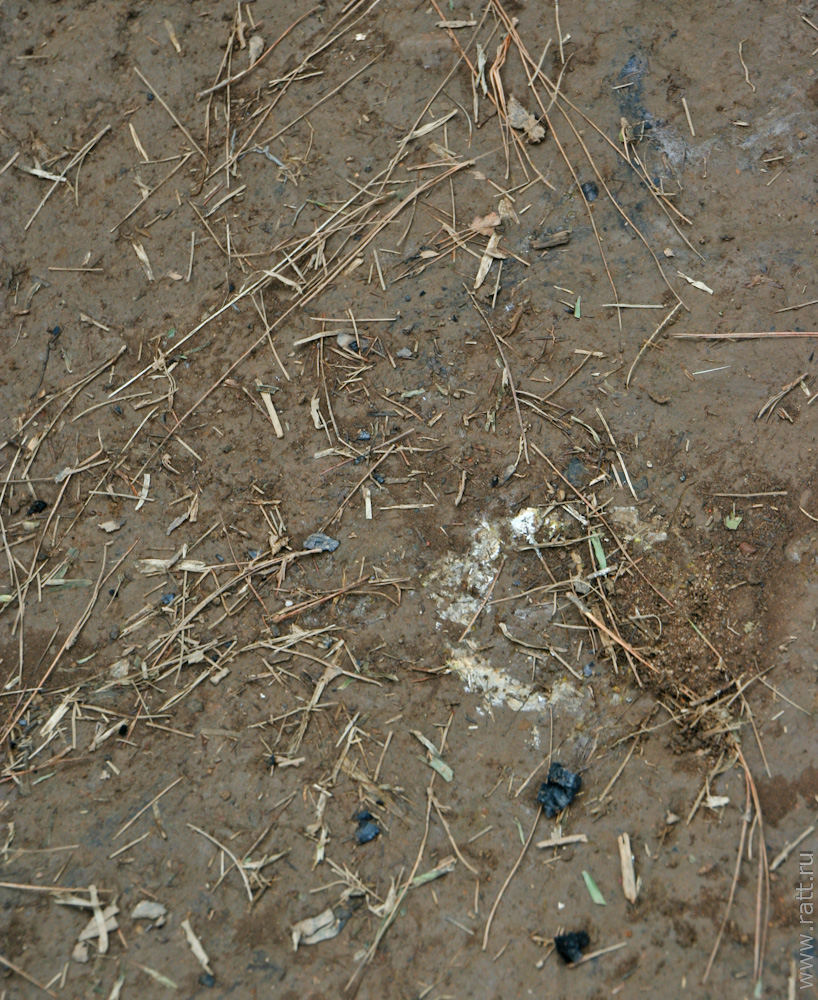 “Just step on – and you’ll get deadly sick” he reassured. I tried to explain delicately, that this is all bullshit and such a sign could be found on any path. At this Whyme appeared silently from the bushed and pulled Zed at the sleeve. In the bush we discovered a hay woodoo doll, dressed in rags. 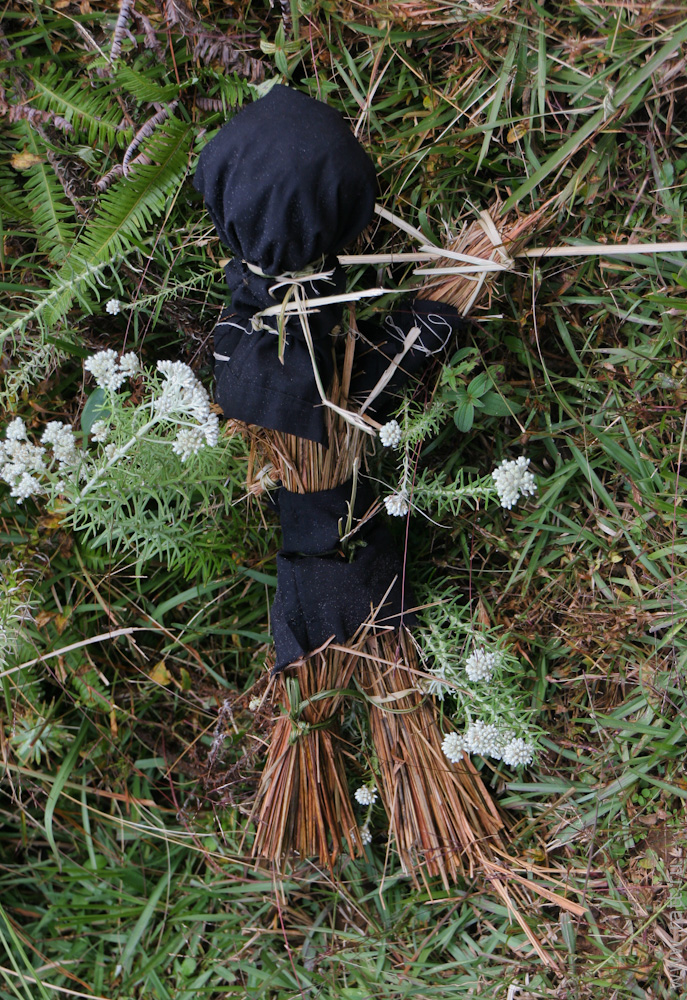 Another object on the trail was a ring made of bamboo. 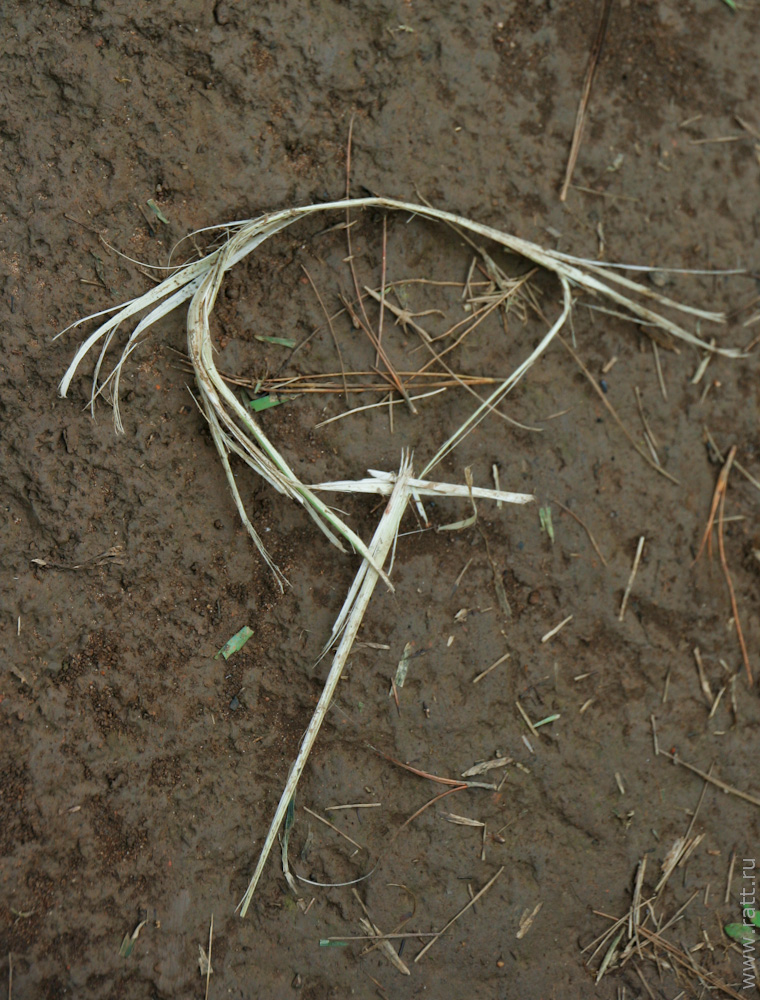 “Witches”, Zed shrugged his shoulders. “They still practice their craft here. You have to be very carefull, as you walk along the trails here”.
Other guys told us of the person, living in the nearby village, who can talk to the souls of the dead. 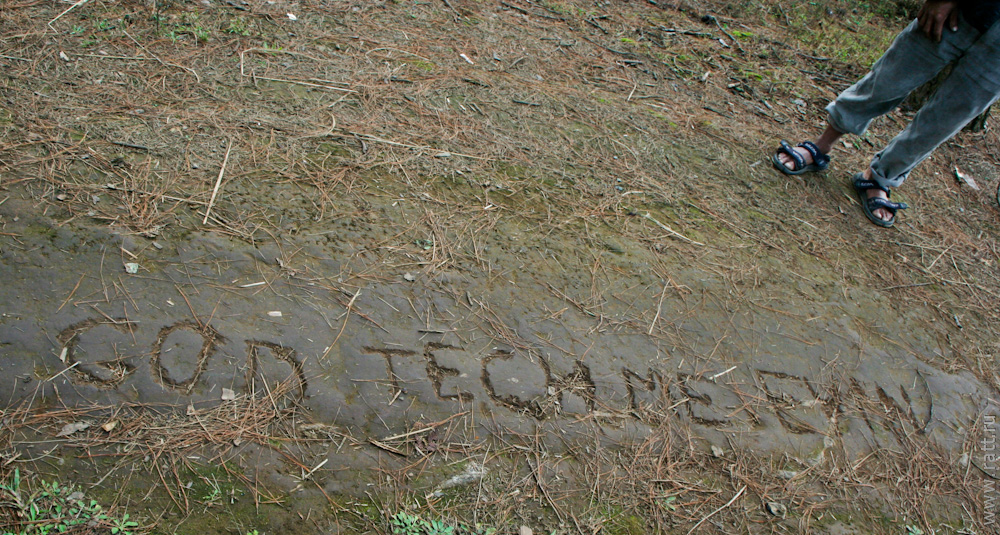 An inscription on a path in the wood«God tech me»

2 Responses to / Khasi and the Black Magic